Good decision-making is made through both the emotion and rational parts of the brain working together.

The brain has two areas – the ‘emotional’ (limbic) brain and the ‘logical’ (neo-cortex) brain. Both areas of the brain have their strengths and weaknesses. The best decision-making involves the use of both.

Decision-making is linked to the emotional part of the brain.The emotional brain is brilliant for dealing with lots of complex information and making fast, unconscious decisions.

Our brains are super-computers taking-in subconsciously millions of bytes of information so they can respond almost instantaneously (cf split second decisions made in sport). The dopamine feedback system – This unconscious ability to make split second decisions (based on lots of complex information) is due to the dopamine feedback system. We are sense-making, pattern-making creatures (which is ‘steered’ by changes in dopamine).

Trial and error is our greatest way of learning.  Every time we fail, we learn chemically. Mirror neurons cause us to empathise – We are emotionally connected to the outcomes of our decisions – thus influencing our decisions.

The flaws of the emotional brain

Creative thinking is a rational process.

The prefrontal cortex is extremely flexible and can see a problem from a number of different angles. However, too much emotion can cloud an issue. The way creativity works is first by removing all data unrelated to the problem.  Then the brain starts looking for associations.

The prefrontal cortex has some control over the emotional brain depending on the relative amounts of positive vs. negative chemicals (hence emotions). When we see something we like, this stimulates the release of dopamine. The prefrontal cortex, the rational part of our brain may then have some opposite viewpoints (e.g. It’ll put on weight or I can’t afford it), which triggers the insula.

In extremis, the amygdale is also triggered (e.g. fear of financial embarrassment etc) creating a wash of counter emotions. As long as the prefrontal cortex (which triggers the negative emotions from the insula and amygdale) does not counter the dopamine level, the purchase is made. This chemical ‘weighing up process’ can take as little as 2.5 seconds to decide on a purchase.

The flaws of the rational brain

a) The conscious mind can only deal with small chunks of data at any one time. The thinking mind is ideal at working with a small amount of data, but add too much and it then tries to grossly simplify and thus makes sub-optimal decisions.

When the conscious mind tries to take control of very complex behaviors (such as in many sports), then we ‘choke’ and become ‘consciously incompetent’ versus ‘unconsciously competent’. More information does not necessarily improve the quality of decision-making – It just makes people (over) confident. Experiments have shown that people still make decisions on a small amount of the data but then seek support for their conclusions from the remaining data.

Experiment: Baba Shiv (Stanford) supplied a group of people with an energy drink (caffeine and sugar) which was suggested to them would improve their performance.  He then charged half price to some and sold it full price to the others, and then made them do a series of word puzzles.  Shiv found that those who had paid a discounted price underperformed the full paying students by 30%. Shiv concluded that because they paid less, they assumed the product would be less effective.

The Power of Habit 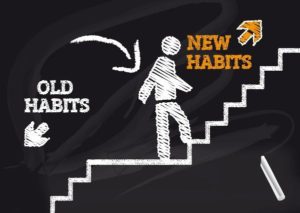 Habits as they are technically defined: the choices that all of us deliberately make at some point, and then stop thinking about but continue doing, often every day.

At one point, we all consciously decided how much to eat and what to focus on when we got to the office, how often to have a drink or when to go for a jog. Then we stopped making a choice, and the behavior became automatic. It’s a natural consequence of our neurology. And by understanding how it happens, you can rebuild those patterns in whichever way you choose.

Habits aren’t destiny, even once they are rooted in our minds. Everything we know about habits, from neurologists studying amnesiacs and organizational experts remaking companies, is that any of them can be changed, if you understand how they function. Once you understand that habits can change, you have the freedom – and the responsibility – to remake them.

For Aristotle, habits reigned supreme. The behaviors that occur unthinkingly are the evidence of our truest selves, he said. A community is a giant collection of habits occurring among thousands of people. The brain will try to make almost any routine into a habit, because habits allow our minds to ramp down.

A three-step loop:
1. First, there is a cue, a trigger that tells your brain to go into automatic mode and which habit to use.
2. Then there is the routine, which can be physical or mental or emotional.
3. Finally, there is a reward, which helps your brain figure out if this particular loop is worth remembering for the future-

When a habit emerges, the brain stops fully participating in decision making. So unless you deliberately fight a habit unless you find new routines the pattern will unfold automatically.

People who have successfully started new exercise routines show they are more likely to stick with a workout plan if they choose a specific cue, such as running as soon as they get home from work, and a clear reward, such as a beer or an evening of guilt-free television.

Why habits are so powerful: They create neurological cravings. Most of the time, these cravings emerge so gradually that we’re not really aware they exist, so we’re often blind to their influence. But as we associate cues with certain rewards, a subconscious craving emerges in our brains that starts the habit loop spinning. 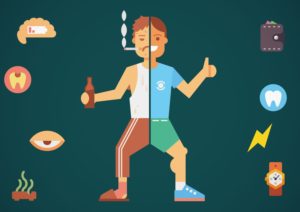 This is how new habits are created: by putting together a cue, a routine, and a reward, and then cultivating a craving that drives the loop.

There are mechanisms that can help us ignore the temptations. But to overpower the habit, we must recognize which craving is driving the behavior.

Countless studies have shown that a cue and a reward, on their own, aren’t enough for a new habit to last. Only when your brain starts expecting the reward – craving the endorphins or sense of accomplishment – will it become automatic to lace up your jogging shoes each morning. The cue, in addition to triggering a routine, must also trigger a craving for the reward to come.

Use this basic formula to create habits:

Want to exercise more? Choose a cue, such as going to the gym as soon as you wake up, and a reward, such as a smoothie after each workout. Then think about that smoothie, or about the endorphin rush you’ll feel. Anticipate the reward. That craving will make it easier to push through the gym doors every day.

Most of the successful dieters also envisioned a specific reward for sticking with their diet – a bikini they wanted to wear or the sense of pride they felt when they stepped on the scale each day – something they chose carefully and really wanted. They focused on the craving for that reward. Their cravings for that reward, researchers found, crowded out the temptation to drop the diet. The craving drove the habit loop.

Cravings are what drive habits. And figuring out how to spark a craving makes creating a new habit easier.

You can never truly extinguish bad habits. Rather, to change a habit, you must keep the old cue, and deliver the old reward, but insert a new routine.

That’s the rule: If you use the same cue, and provide the same reward, you can shift the routine and change the habit. Almost any behavior can be transformed if the cue and reward stay the same. Most people’s habits have occurred for so long they don’t pay attention to what causes it anymore.

It seems ridiculously simple, but once you’re aware of how your habit works, once you recognize the cues and rewards, you’re halfway to changing it. If you want to change a habit, you must find an alternative routine, and your odds of success go up dramatically when you commit to changing as part of a group. Belief is essential, and it grows out of a communal experience, even if that community is only as large as two people.

To identify a cue, we can use the same system as the psychologist: Identify categories of behaviors ahead of time to scrutinize in order to see patterns.

Luckily, science offers some help in this regard. Experiments have shown that almost all habitual cues fit into one of five categories: